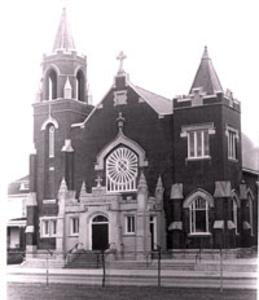 Saint Anthony of Padua Parish was dedicated in 1891. It was only the eighth Catholic parish in Marion County and the first west of White River. Its original boundaries were the White River on the east, the Vandalia tracks on the south, and the Marion County line on the west and north. Eventually, six "daughter" Catholic churches opened within the original boundaries. Holy Trinity, St. Christopher, St. Michael, St. Joseph, St. Monica and St. Gabriel served a growing and vibrant population.

​     In 2014, Holy Trinity and St. Anthony parishes were consolidated into a single community by the Archbishop.

​     St. Anthony has been served by a number of pastors beginning with Father Dowd who was pastor when the church was dedicated. Other pastors who have served here include Father Byrne, Father Busald, Father Gorman, Father Knapp, Father Ryan, and our current priest, Father John McCaslin.